Moore and Moore? The Fate of Processor Design

Back to Blog
Moore and Moore? The Fate of Processor Design
| Team Dover

With quick returns to processor innovation gone, designers must look elsewhere for the next generation of computing hardware.

It should come as no shock to anybody that computers are faster than they were 10 years ago. A lot faster.

The iPhone that is sitting in your pocket right now has a clock speed 32,600 times faster than the computers that helped land the Apollo mission on the moon (ZME Science). Think about that the next time you are typing a tweet or sending a text.

This rapid increase in processing power was predicted by Gordon Moore of Fairchild Semiconductors way back in 1965.

In essence, Moore predicted that every year the number of transistors in an integrated circuit would double. Ten years later, in 1975 he revised his prediction to a doubling every two years. Looking back at the data it seems that Moore’s premonition was spot on. Transistor counts in microprocessors have taken a linear path upwards over the last 40 years. 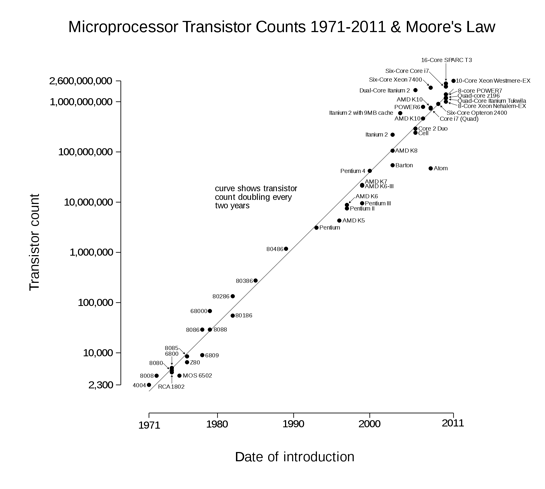 Source: By Wgsimon (Own work) CC BY-SA 3.0 via Wikimedia Commons

Moore’s law has enormous consequences for not only the semiconductor industry, but for all consumers who benefit from increased performance and reduced costs. Smaller and faster processors have led to advances in a wide variety of industries from personal computing to industrial automation.

However, the end may be in sight for Moore’s Law.

The first signs that the industry may not be able to keep pace with the law came in the early 2000’s when things started to heat up. Forcing electrons through smaller and smaller circuits causes a lot of heart. If this was not the nail in the coffin for Mr. Moore’s law, then the turn to mobile computing definitely was. With different priorities such as energy efficiency and form factor taking precedence, doubling the number of transistors became a second priority.

The End of an Era

This Law states a semiconductor manufacturers will experience two fold growth in the price of chip manufacturing plants every four years. In addition, decreasing chip size inevitably leads to mistakes. The number of wafers exposed to end-of-line quality incidents is projected to increase ten times from 1995 levels by 2020 (Accenture Strategy Analysis).

While the foundation of Moore’s Law become more and more unstable, where does the industry turn?

Specialization seems like a safe bet with the growth of embedded processors and mobile technology. Processor speed and transistor density may not increase at the same speed as it once did, but that will not stop innovation. Chips will come with more and more features for highly specified applications.

Will Moore’s Law finally come to an end? Who is to say. All we know for certain is manufactures will need to explore other strategies as the returns to scaling quickly diminish.